Legends of Runeterra, the digital collectible card game made by Riot Games, has been in open beta for just over a month, giving players and content creators enough time to craft some killer decks with the starting pool of cards. If you’re curious about the game or just beginning to get your feet wet, now’s a good time to build a beginner deck and start climbing the Ranked ladder.

Below, we’ve collected three decks that capture Legends of Runeterra’s range of card interactions and strategies without requiring rare cards. Each one encourages a different playstyle, so if you’re completely new to the game, try each one and determine which one is the best for you.

First, a word of advice

Even if you lack all the cards in the following decks, you can still import them into your game by copy-and-pasting their respective deck codes into the “Import deck” field found under the collection tab of the game. That way, you can review individual cards at your own pace alongside this guide and decide whether or not the deck is worth crafting.

Elise is a powerful champion who does best when surrounded by her favorite company: spiders. The goal of Arekkz Gaming’s “Queen Elise Spider Army” deck is to quickly generate, buff, and occasionally sacrifice spiders in an effort to overwhelm the opponent.

The general strategy for succeeding with this deck is leveling up Elise by summoning tons of spiders, which you can in turn buff with additional cards. A leveled-up Elise and a full board spells doom for your opponent as they struggle to deal with your spiders’ Fearsome ability, preventing them from being blocked by weaker cards.

In addition to playing spiders from your hand, you can also summon spiders byplaying House Spiders, Vile Feast, or the ultra-powerful Brood Awakening, a high-cost card that not only summons three Spiderlings but also buffs all spider allies on the board. It’s a handy escape route if your board is cleared late in the game and can work well as a finisher.

Crawling Sensation and Black Spear capitalize on the deaths of fallen arachnids, while disposable Spiderlings make great targets for cards like Ravenous Butcher or Glimpse Beyond. Fresh Offerings spawns a 6/6 Vilemaw spider with Fearsome when three of your units die in a turn.

This deck takes advantage of the “elusive” keyword, a mechanic that can be lethal if harnessed correctly. Since cards with the “elusive” keyword can only be blocked by other elusive cards, the deck’s strategy is all about presenting the opponent with a deadly offensive to which there are few answers.

As such, the deck is filled with elusives like Greenglade Duo, Navori Conspirator, Shadow Assassin, and the lifestealing Kinkou Lifeblade. These elusive cards are the desired targets for the deck’s many buffs, including Take Heart, Twin Disciplines, and Elixir of Iron. You can best take advantage of the deck’s Inspiring Mentors and Omen Hawks by recalling them with Navori Conspirator or even Will of Ionia if appropriate.

Lastly, the deck has a few defenses up its sleeve for protecting its elusive cards from damage. Deny is key for dispelling any removal spells, while Will of Ionia is good for taking care of any serious threats on the board or saving your cards from removal spells.

Braum is by far the best defensive card in the deck. When played normally, his “challenger” keyword can help clear up your opponent’s side of the board, while his champion spell essentially grants your deck extra Take Hearts for your disposal. 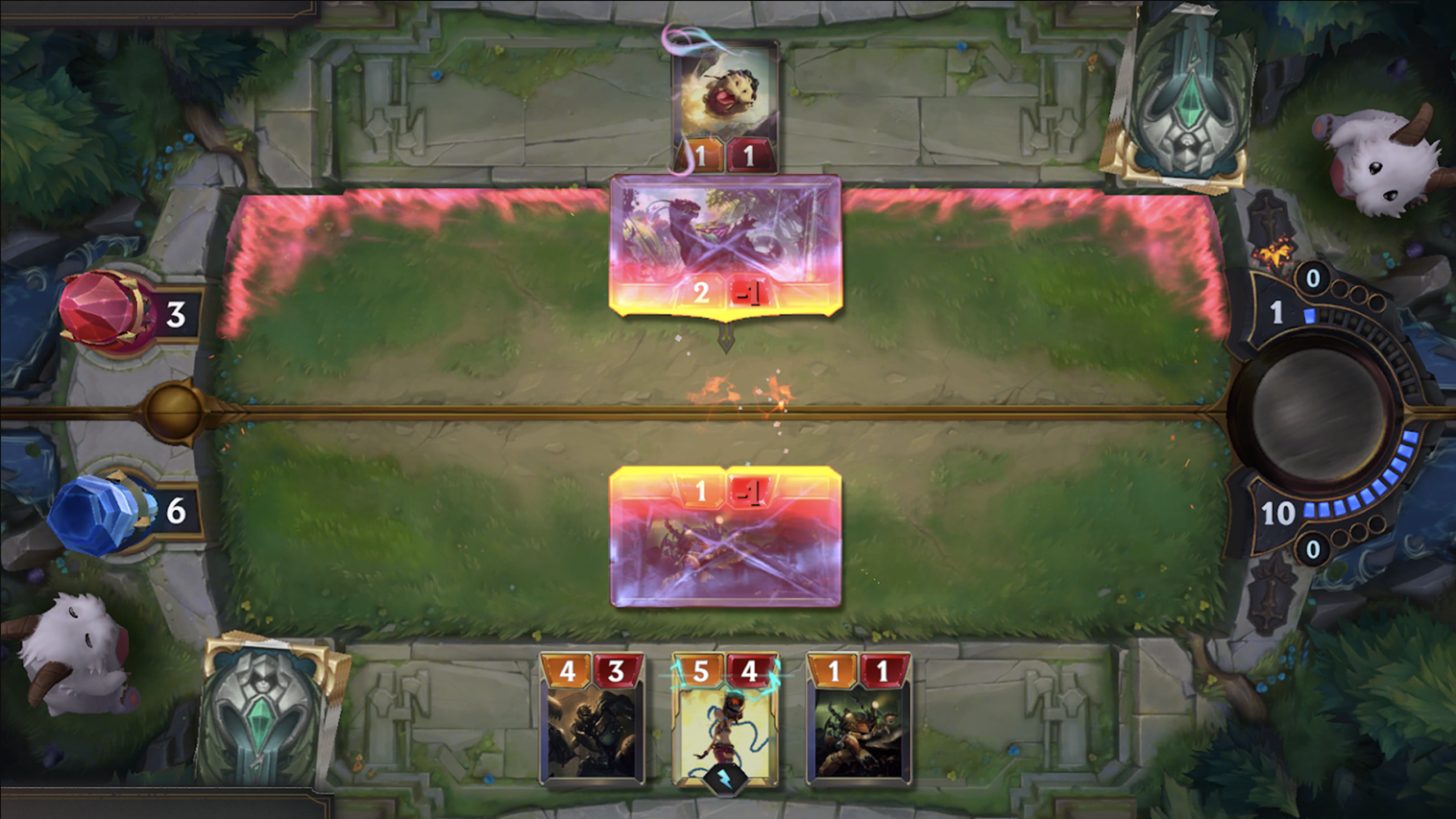 Jinx is the centerpiece of this aggressive deck. Its main strategy is to chip away at the opponent’s Nexus with elusive cards and buffs until you’re ready to play and level up Jinx. Jinx’s leveled up form produces Super Mega Death Rocket!, a punishing spell that deals damage directly to the enemy Nexus while splashing AoE damage across the enemy’s board.

Since Jinx’s abilities depend on having an empty hand, it’s best to play cards over saving them, often using as much mana as is available. That’s why the deck is filled with low-cost cards that can be expended at will.

Just like Control’s deck, this deck runs a host of elusive cards: Greenglade Duo, Navori Conspirator, Shadow Assassin, and Kinkou Lifeblade. Astute Academic, Inspiring Mentor, and Keeper of Masks are each helpful in buffing smaller cards in the absence of units with bigger stats.

Thermogenic Beam, Mystic Shot, and Get Excited! are all useful removal spells for dealing with big threats on the board, while Chempunk Shredder can help take care of, say, a board full of low-health spiders. Jinx herself can also act as a useful defense; her “quick attack” keyword gives her the upper hand during encounters with any units that fall within range of her attack stat.