Dragons Have Finally Arrived In The Elder Scrolls Online, And They’re Terrifying

The Elder Scrolls Online’s latest chapter, Elsweyr, introduces not only dragons but also a character class — the Necromancer — as well as a whole new playable area that’s rich with lore to uncover. Every one of these new elements was implemented with love and care from the ZeniMax team, who devoted a lot of hard work to making sure that Elsweyr is consistent with The Elder Scrolls’ narrative universe.

Introducing dragons to The Elder Scrolls Online presented ZeniMax with an interesting challenge. While ZeniMax knew dragons were an important element of The Elder Scrolls’ lore, they wanted to make sure that they could do them justice.

“We'd always wanted to do dragons,” Creative Director Rich Lambert said. “But they were a huge task, a big investment in terms of technology, and we wanted to make sure we could do it right.” Additionally, while dragons are prominent in other Elder Scrolls games like Skyrim, they’d never made an appearance in The Elder Scrolls Online prior to Elsweyr. 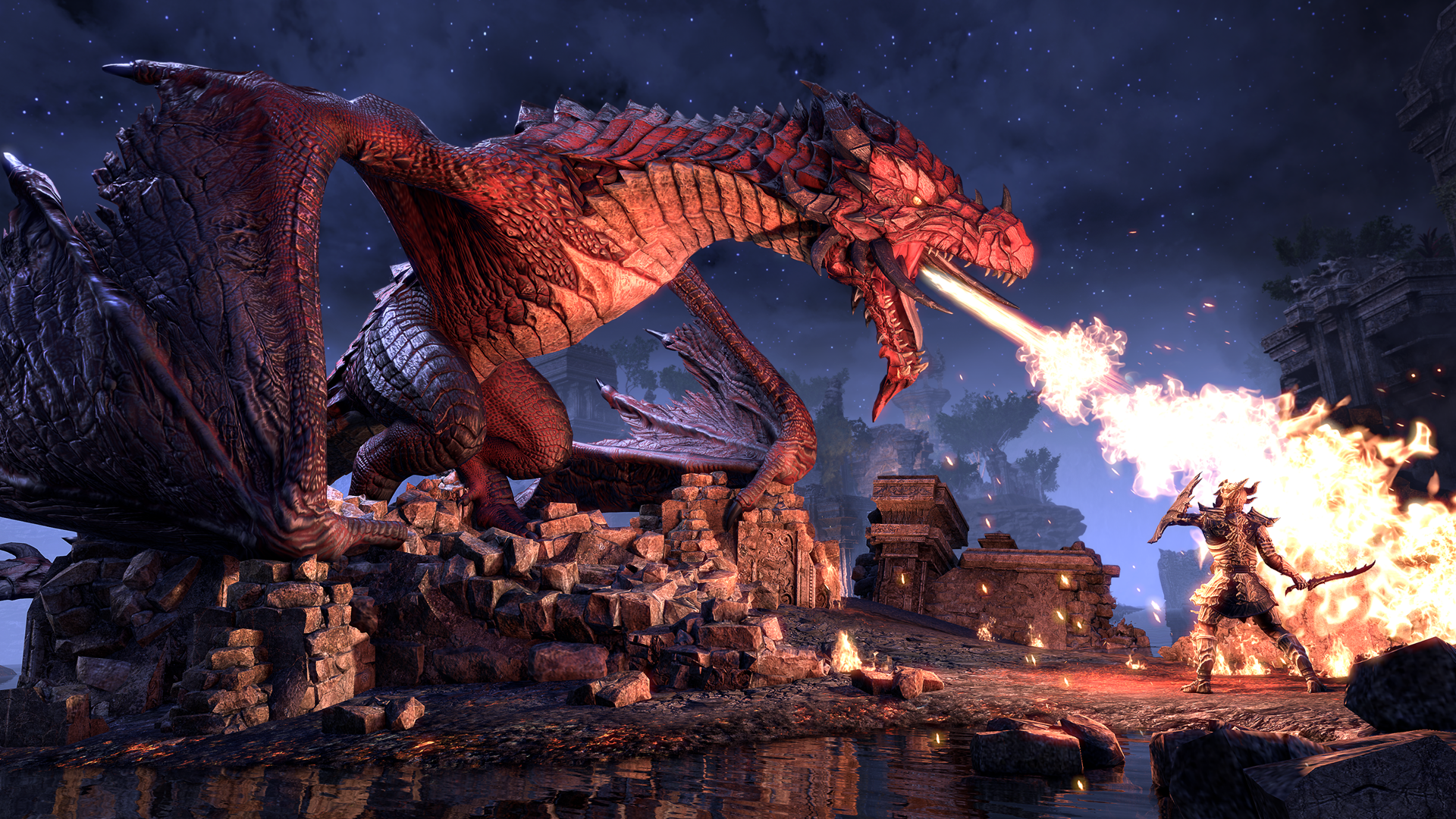 They had a system in mind: They wanted the dragons to feel striking and dominant, and they also wanted players to be able to encounter them unexpectedly during their travels throughout Tamriel. But they also needed to justify the dragons’ existence in The Elder Scrolls Online’s timeline. After all, how could dragons suddenly appear in a Tamriel that had previously seen barely any mention of them?

So they devised a clever plot device. They would explain that, all this time, a number of dragons had been trapped in a prison below the Halls of Colossus in Elsweyr. The player character would accidentally play a part in freeing them, explaining their sudden appearance in Tamriel. 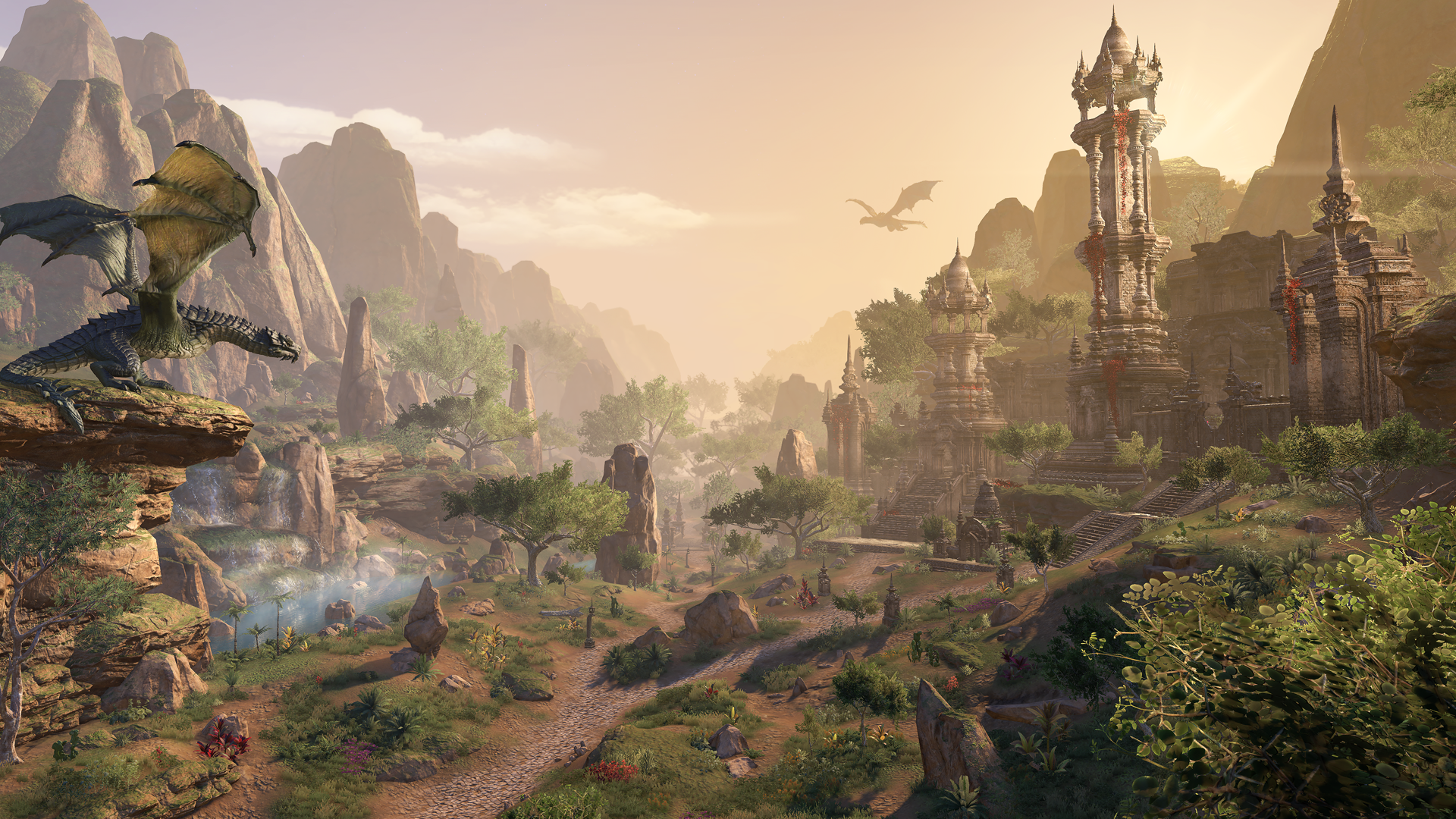 For ZeniMax, authoring new content for a frequently updated MMO like The Elder Scrolls Online while remaining consistent with the franchise’s dense, thoroughly developed lore is a constant challenge. On top of that, The Elder Scrolls Online takes place right in the middle of the series’ timeline, with Skyrim taking place a thousand years into the future. Balancing the needs of their players against the needs of the lore is quite a daunting task.

But with dragons, ZeniMax pulled it off. Encounters with dragons are soul-shaking, adrenaline-inducing affairs. They’re so menacing, in fact, that you’d be foolish to take any of them on alone. ZeniMax recommends you link up with a team of as many as eight players if you want to down one.

“In Skyrim, because you were the Dovahkiin, you could solo a dragon,” Lambert said. “You slaughtered dragons and absorbed their power and became even more powerful. In our timeline, however, there are no Dovahkiins, so you don't have those powers. You don't have that toolkit to deal with the dragons.” 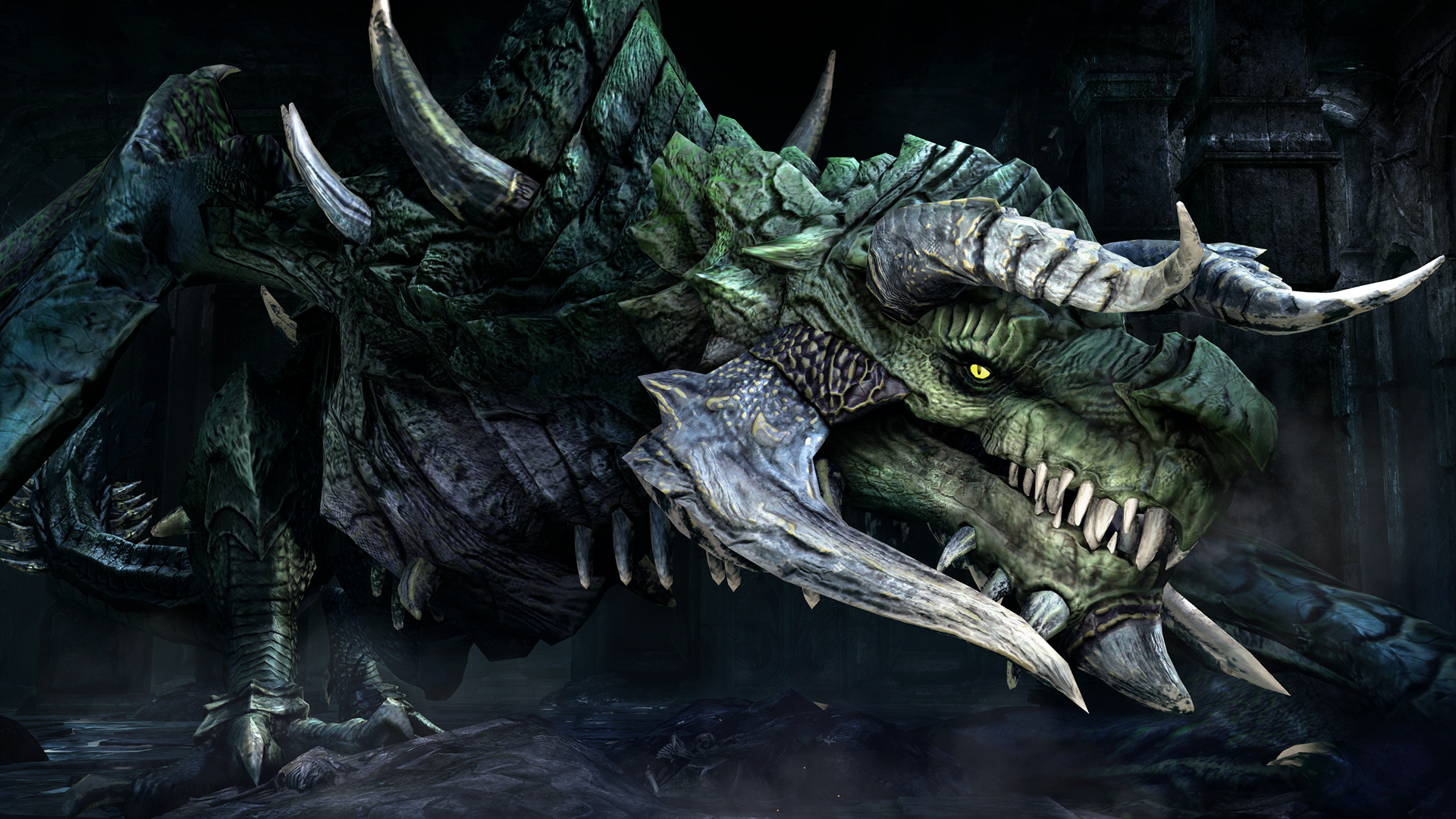 Not only are the dragons immensely powerful, but they also have the potential to appear out of nowhere. Dragons spawn in different areas scattered throughout Elsweyr at regular intervals and then choose a flight trajectory, but their paths can be difficult to predict. “Players are never really quite sure exactly where a dragon is going to spawn and also not sure where they are going to end up,” Lambert explained.

The implementation of dragons in The Elder Scrolls Online is a perfect example of ZeniMax’s skillful MMO design. They encourage cooperative play in a shared world, they fulfill a longtime demand from the game’s fanbase, and they fit neatly into ESO’s narrative timeline without disrupting the lore. Manipulating the player’s sense of scale by making Elsweyr’s dragons even more formidable than their Skyrim counterparts is also a clever way of making them feel even more novel for seasoned Elder Scrolls players. 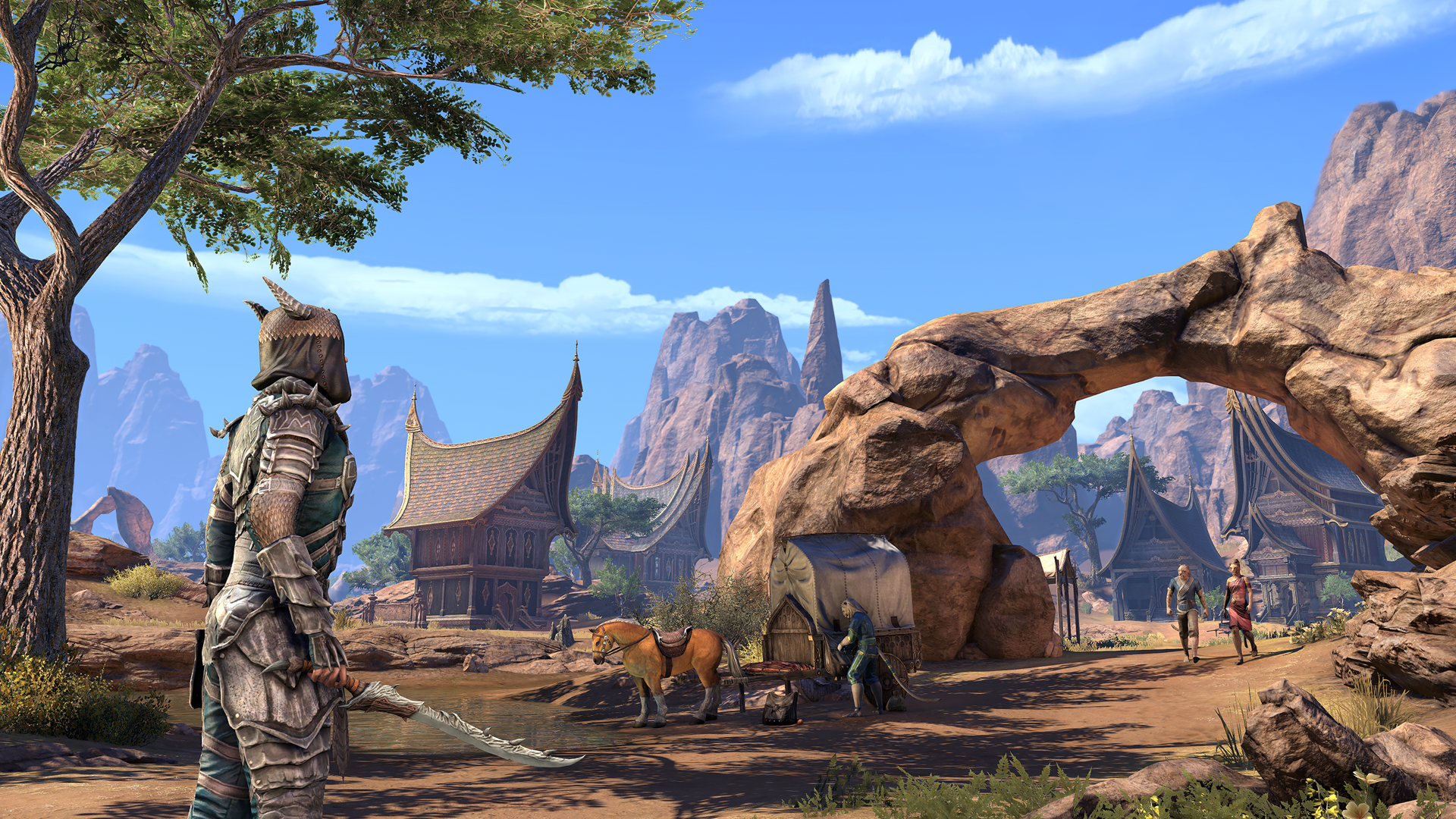 As with every lore-related development, ZeniMax worked closely with Bethesda Game Studios to ensure that Elsweyr’s dragons were kosher within Elder Scrolls’ lore. Out of all the new elements Elsweyr introduces, dragons gave Bethesda the most pause. “They weren't as worried about necromancy because necromancy was very well established,” Lambert said, “and they weren't really worried about the Khajiit and their lore because they trust us on that kind of stuff.”

Dragons, however, are such an iconic part of Elder Scrolls that Bethesda wanted to be careful about how they were handled. “We went back and forth a lot on dragons and how they work and why they were there. We really iterated on that part of the pitch before we went into development on it,” Lambert said.

The back-and-forth, however, paid off. The introduction of dragons is one of the biggest things to happen to the game. Along with both the new Necromancer class and the chapter of the dense Khajiiti lore, Elsweyr makes Tamriel all the more rich and exciting to explore. Even if you haven’t had a chance to play ESO yourself yet, Elsweyr also contains a reworked tutorial, making now as good of a time as ever to jump into Tamriel.

The Elder Scrolls Online: Elsweyr will be available on PC on June 4, 2019. 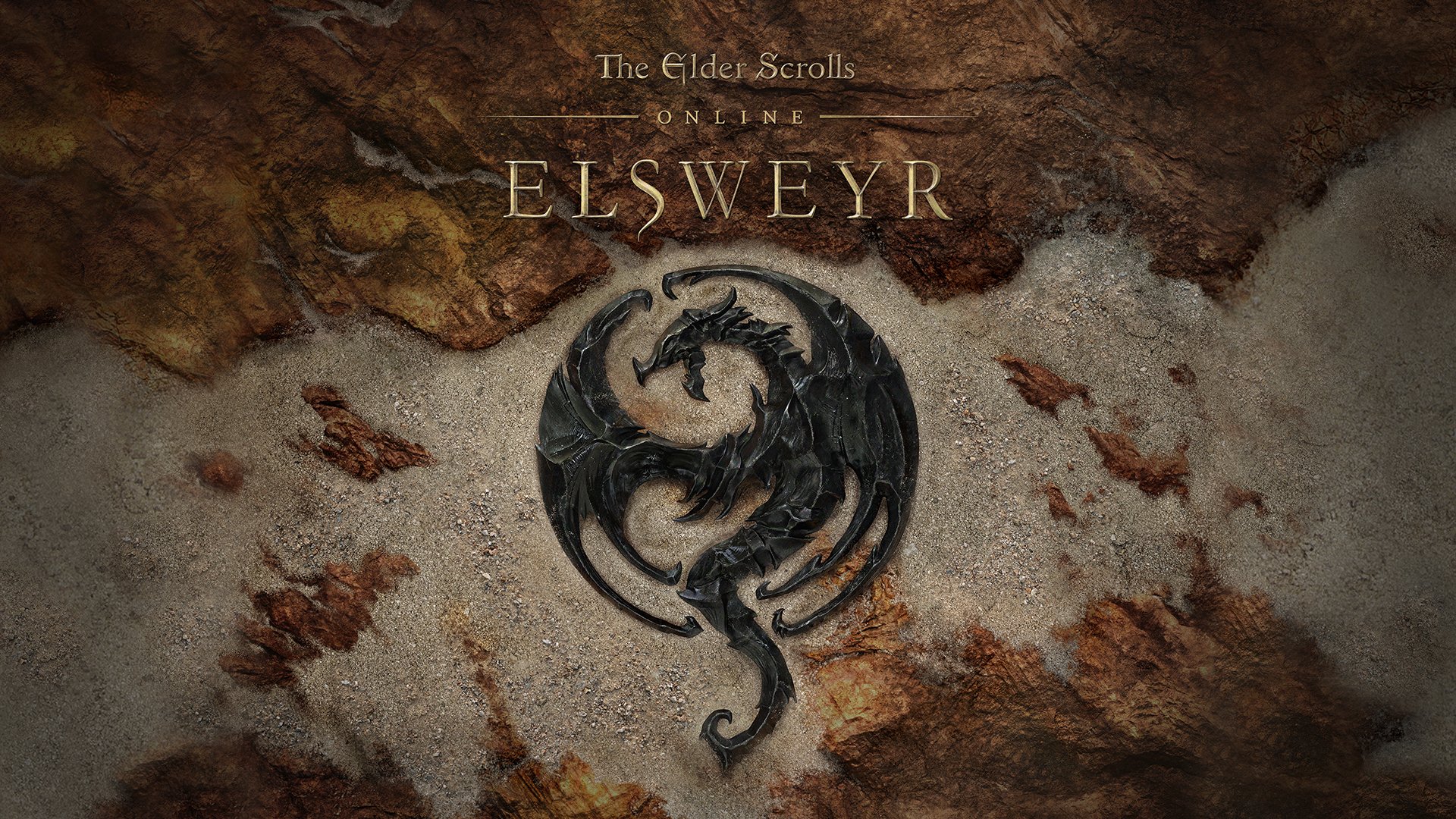