Imperator: Rome Is Paradox Interactive’s Most Detailed Game Yet

It’s 304 BCE. Alexander the Great has been dead for nearly two decades, and the empire he built is now a diffuse smattering of kingdoms. Rome, in the midst of its republican years, is on the verge of war with Carthage. Ptolemy is about to declare himself pharaoh of Egypt. The Seleucid Empire in Persia is drafting plans to expand westward. Humble tribes in Macedonia and Anatolia are preparing to make a serious nuisance of themselves. This is the Hellenistic world, still congealing in the aftermath of Alexander’s sudden demise. It’s the setting for Imperator: Rome, which asks the player what their role in this volatile historic moment is going to be.

Paradox Interactive has long been a titan of the grand strategy genre, and Imperator more than lives up to its pedigree. The map stretches from the United Kingdom and lower Scandinavia to North Africa, from the Iberian peninsula to India. The player can control one of over 400 nations, which vary in size from Rome all the way down to picayune city-states and nomadic tribes. “The scale is what allows us to portray the Hellenistic world as a living and evolving world,” says Game Designer, Henrik Lohmander, “which to me has always been one of the main draws of our games.”

That scale is immediately understood simply by setting up a playthrough of Imperator and surveying the variety of scenarios you can jump into, but it truly reveals itself only in time, as you come to appreciate the game’s myriad subtleties: the logistics of feeding your people, the finer points of manipulating your nation’s senate, the way geography impacts warfare. There’s so much to do, and so much to account for.

Say you’re starting out with Rome and you want to drive the Carthaginians out of Sicily. Making that happen isn’t a straightforward task. You need to organize a navy and set aside funds, consolidate political support and make sure nobody’s going to attack your capital while half your soldiers are traversing the Mediterranean. Preparation is essential, as is the ability to think a couple moves ahead, since your war is inevitably going to perk up the ears of other regional powers.

There are submenus for accomplishing all this and percentages to keep an eye on, but as you familiarize yourself with the machinery that makes Imperator hum, the artifice falls away and you begin to dissolve into its world. Lohmander claims this is “the most detailed game Paradox has ever made,” and that’s not a comment sheerly on Imperator’s complexity. The complexity becomes less overwhelming over time, and as you learn how all the stuff in the game works, you come to appreciate the prismatic consequences of your every decision.

So you’ve won your showdown with Carthage. Sicily belongs to Rome. This gives you access to fresh resources and lends your growing republic greater manpower. But you notice a slight problem: a regiment that did a lot of the heavy lifting in the war is in the thrall of their general. Having fought alongside him in battle, they now trust his judgment more than yours. This isn’t an immediate concern, but it’s something to monitor. You start training a new army, which you place under the control of somebody you trust, just in case this charismatic general gets ideas about sparking a civil war upon his return to Rome. 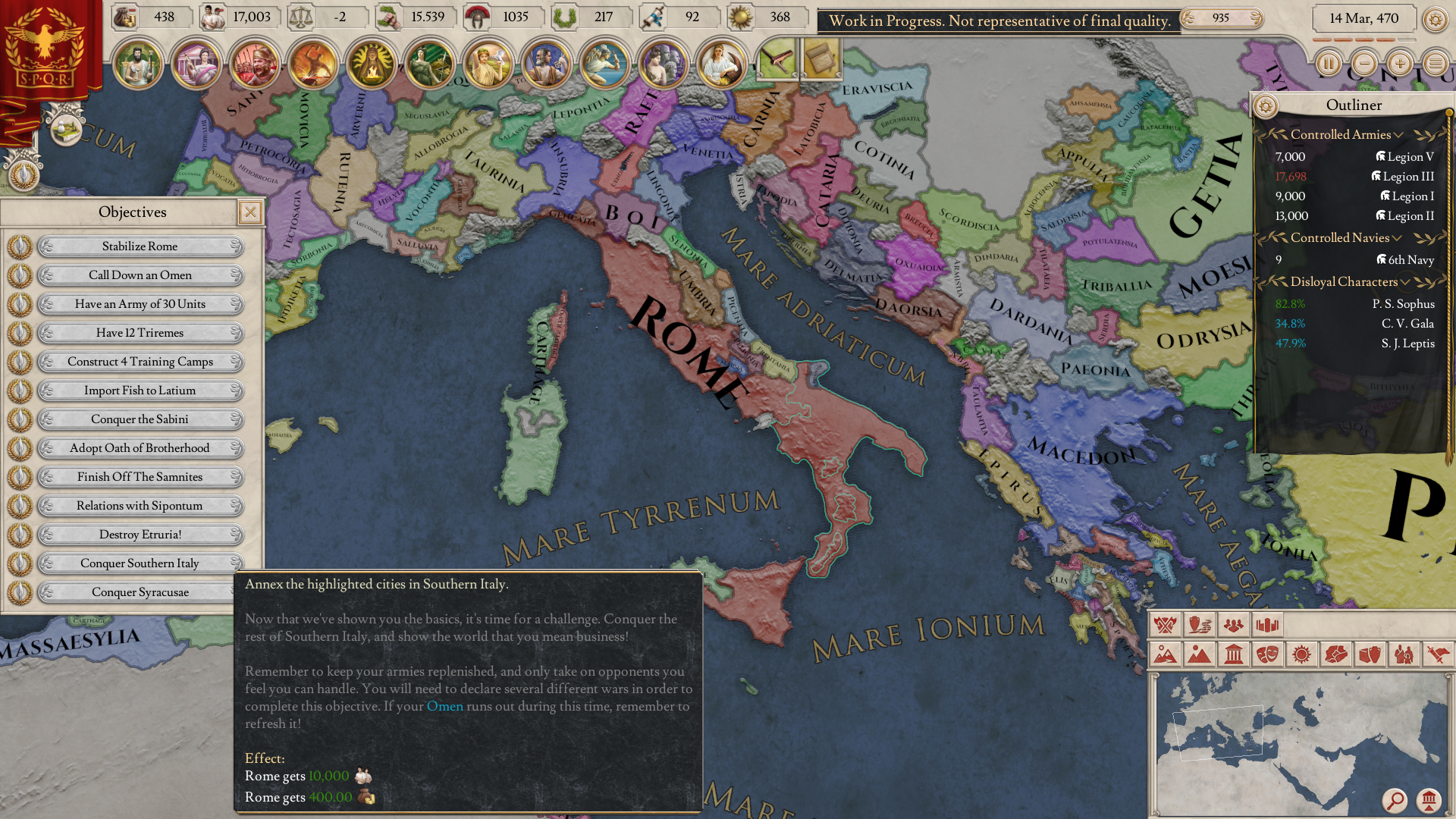 You do this because there’s a thing called the Loyalty mechanic, which gauges how strongly other people believe in you. It’s a system inspired by the Hellenistic period itself. “Caesar crossed the Rubicon, Bomilcar attempted to depose the Carthaginian senate, and Ptolemy rebelled against the regents after Alexander's death,” Lohmander recalls. If you want to be more Ptolemy than nameless regent, you keep track of who’s loyal to whom. It’s a number in a user interface, but more than that, it describes your political standing and indicates dangers you might need to head off in the near future.

Loyalty is one of many factors you will track as you experiment and conquer and stumble your way through Imperator: Rome. Lohmander describes the experience accurately when he says that “the actions and reactions of all the agents in the game — countries, characters, your own citizens and the minorities you rule — all come together to create a story that will be inspired by reality, but unique in each playthrough.”

The possibilities Imperator presents are practically endless, but they have weight because they feel so thoroughly grounded in a world that responds to your every touch. You can build Rome or you can manage the survival of an obscure Persian tribe. Whatever you do, you’ll make waves.

Now, get in the mood to leave your mark on history and keep the Imperator Rome story close with some awesome wallpapers.