This Watercooled Gaming Desk Was Designed to Push Boundaries

Let’s face it: gaming PCs can be unwieldy. As impressive as a PC might look in person, finding a graceful way to fit it into your battlestation setup can be a bit of a challenge, especially if the space it occupies is cramped or narrow.

The masterminds over at Overclockers UK are aware of this problem, too, and have offered up an unconventional solution. “Most of our flagship systems are hefty beasts, swallowing up the space on your desk because they rarely fit under it — nor, really, would you want to hide such stunning bits of kit under a desk,” Systems Manager Scott Bentley said. “So we started to look at alternatives to the standard super-tower or monster cube style systems. The best way to build a high performance, hero PC without taking up a load of space on the desk? Put it in the desk!” 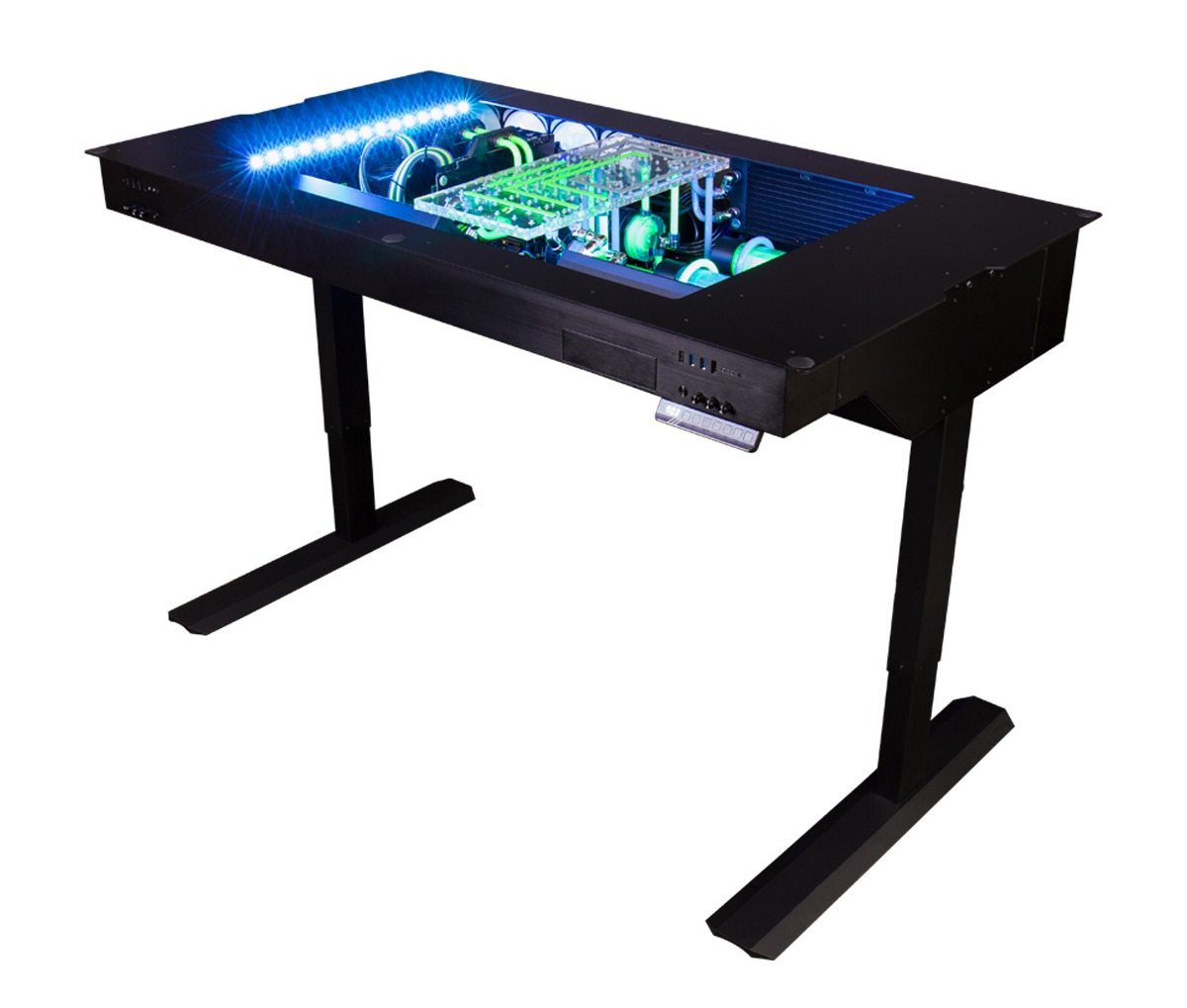 The end result is as logical as it is absurd: the Infin8 Altar, a fully water-cooled PC that’s built into a motorized, height-adjustable desk. It was originally designed for a gaming YouTube creator, who’d specifically requested a water-cooled gaming PC desk from Overclockers UK. Bentley was eager to take him up on the challenge. “We took the opportunity to kill two birds with one stone and push forward with the build,” he said.

‎The system was built with an Intel® Core™ i9-7900X in mind. “Since it was originally for a gaming content creator, the default spec is based on a CPU which offers a good balance between multitasking, multi-core workloads and clock speed-hungry gaming workloads,” Bentley said. 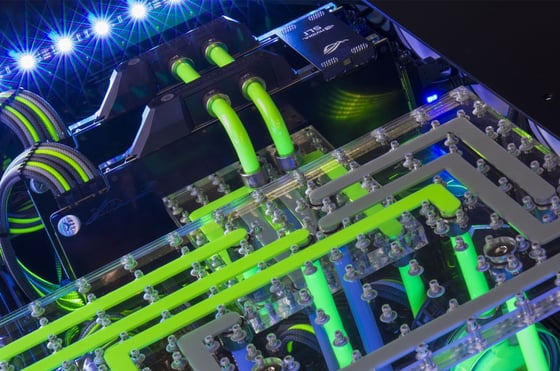 Overclockers UK speed-bins every processor they get their hands on to ensure that premium builds like the Infin8 Altar get the best of the best. It’s a meticulous process that involves testing identical CPUs against each other to identify the components with the fastest speeds. “We then hand the CPU to our senior technicians and often [Overclockers UK’s overclocking wizard] 8Pack himself to overclock the CPU and — the key to our ultimate performance — tune the memory,” Bentley said.

Though the original build was intended for someone looking to balance gaming against content creation, Bentley asserts that the Infin8 can be customized to suit a variety of needs. “If you want a different spec or even just a different color scheme, we can do it,” he said. “Laser-etched logo? No problem. Spray painted chassis? Wooden panels? Totally custom case? Sure, why not! If you don’t mind the cost, we love a challenge at Overclockers UK.”

To design the desk, the Overclockers UK team first measured their chosen chassis, a Lian Li DK-05 desk, and modeled it in 3D. This allowed them to experiment with different ideas and draft the build’s specs in a virtual space. “It’s usually at this stage where we realize just how much work is really going to be involved if we want to achieve our crazy vision,” Bentley said. 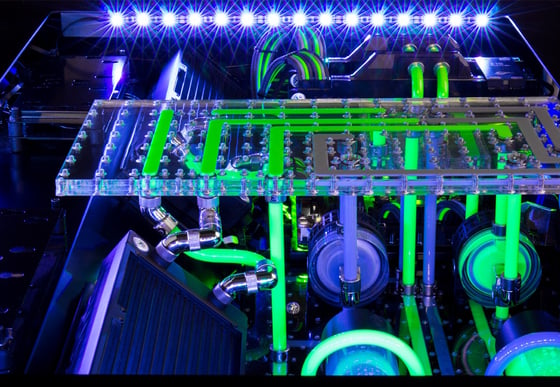 The biggest challenge in constructing the desk was figuring out how to cool everything. With an overclocked CPU and two GPUs under the hood, the desk needed ample water cooling across the entire chassis to ensure that every component was accounted for. The main problem, however, was that in the initial design the reservoirs and distribution plates were located on one end of the desk.

Bentley brought this up with the design team. “They soon realized that getting the fluid from this plate, which sits on one side of the desk, to the components on the other was going to take a bit of extra creative thinking,” he said. “We really wanted to avoid having long runs of tubing spanning the width of the chassis.”

They decided to craft not just one but three separate custom acrylic pass-through plates to mediate the flow of the liquid across the system. “The final design includes a central fluid distribution plate, which handles the flow of fluid to and from the pumps, reservoirs, and radiators,” Bentley said. “Located just under the glass, in the middle of the chassis, it doubles as a bit of a centerpiece for the build. There is then a third plate, floating above the motherboard, which moves the fluid from the distribution plate to the components.” The result is not only functional but aesthetically pleasing.

“We build these systems because we love pushing the boundaries of what is possible and we really like to show off what we can do,” Bentley said. “Wherever ultimate performance is required, Overclockers UK should be the first port of call. I guarantee that we’ll surprise you.”

Check out Overclockers UK’s website if you want to purchase an Infin8 Altar of your very own.

James Bardolph Wanted a Dual-PC for ...

The Difference Between Refresh Rates ...